In February 2013 members of Timu Rafiki spent a week in Kenya primarily to visit Siaya District Camp Site and attend Founderee celebrations as well as introducing Kenya to new supporters of the charity. 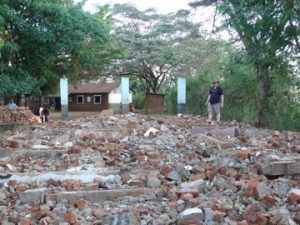 We visited the District Campsite at Siaya to see how the site had developed since our Christmas 2011 trip.  Unfortunately the building we had helped build in 2011 had recently burnt down due to an electrical fault – we therefore began initial discussions with a local architect re. potential re-building.

The name AMANI means peace in Swahili, which is the aim of the orphanage – to provide for children who have been orphaned, abused or abandoned. The word HOPE was included in the name as Amani is an oasis of hope to those in desperate need and each rescued child is provided with the hope of a better future.

Timu Rafiki supporters in the UK had donated many bags of clothes and we were able to pass these on to the children of Amani.

Our Founder Lord Robert Baden-Powell retired and spent the end of his life in Nyeri, Kenya. He lived in a small house with only a few rooms that he named Paxtu – it is still located in the grounds of the Outspan Hotel. Paxtu is now a small Scouting museum which we visited and whilst doing so we pinned a Timu Rafiki scarf on the wall amongst the hundreds of others.

Baden-Powell is buried at St. Peter’s Cemetery in Nyeri. When his wife Olave died, her ashes were sent to Kenya and interred in the grave also.

On February 22nd, Founders Day and Thinking Day, we visited both Paxtu and B-P’s grave.  Three of our party made their Promise at the graveside. We also carried out a Good Turn by tending to B-P’s doctor’s grave – Doctor Doig and his wife are buried very near to B-P and we were contacted by Dr Doig’s grandson via Facebook who asked if we could find time during our visit to tidy up the grave site. 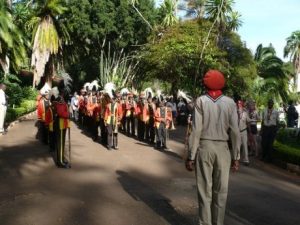 We also visited the annual 4 day Founderee pre-camp at Kabiruini Agricultural Showground, attended by about 30,000 Scouts.

On February 24th we joined the 30,000 campers, local Scouting, Guiding and WOSM dignitaries plus many, many more at the Founderee parade from Paxtu to the cemetery for a graveside Founders Day service, where we laid a wreath.