In February 2016, a group of 12 of us travelled to Kenya for a research and update trip around several projects that have been set up across Kenya. We first visited Rowallen Scout HQ which is the place that BP’s ‘other foot’ is, from here we saw a small portion of the large slums that it’s situated next to.

We then traveled up to Siaya and visited their Scout HQ which by day is a nursery. We lead the kids in a few well known camp songs and played games with them. This was the place that in 2011, the Timu Rafiki team built a building which was to be used as a store room for future camp equipment.

Afterwards we traveled out to an orphanage that two of the team members had helped set up a few years ago, we met the guy heading this project up and offered our services in the possible future.

Whilst we were in Siaya we visited a couple of schools that could benefit from a scout group, or had a scout group already but might have needed some extra funding to get it off the ground and allow the Young People to do more activities within their community. The way the Kenya Scouts association is now running things, means that there cannot be a scout group that is based outside of a school, this limits the number of kids who can attend after Primary school as their parents have to pay tuition fees on top of scouting costs.

In the last few days that we were out there, it was Founderee which is a giant jamboree set up all to celebrate Lord Baden Powell’s Birthday. Each year scouts acrossKenyaand other countries come together at one big campsite and enjoy activities, an evening of campfire songs and then travel to Paxtu to join the march before heading back to enjoy an afternoon of final activities. This year was the first year that scouts had to apply to be at the ‘official’ Founderee Camp inKenya, a lot of the Scouts had been raising money to get there and even walked for a few days just to get there.

We visited the campsite 1 day after the Young People were allowed to set up camps, it was interesting talking to the leaders and older scouts about where they’ve come from, what their scouting history is. A lot of them had dreams of going to a camp outside of Kenya and were working towards fundraising to visit a different country. We met a few Scouts who had attended the World Scout Jamboree the year before and heard stories of how that has impacted them and made them want to do more for scouting in their home town.

Whilst at Founderee, we handed out Personal kits to all the female Scouts and Leaders as they were an issue that had been raised to Timu Rafiki the last time we were out there. They seemed to appreciate this and in return offered us to visit their campsite and they group activities when we next went back.

During the Founderee parade which starts at Paxtu (BP’s final resting place) and went all the way down to his grave site. We then joined hundreds of Scouts in celebrating the life that BP had and had set up for us all to enjoy for years to come. This included awards being given, a brief summary of what the Scouts and Guides has been up to in the last 12 months, and several performances by the several Scout bands that were at the parade.

Our correspondent in Kenya– Josh – was with us the entire week, helping with school knowledge and local knowledge of possible areas that could gain from a Scout group. On the last day we visited his home to help set him up with Internet so that he can update us on what’s going on. 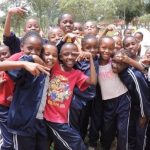 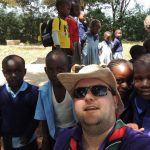 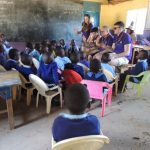 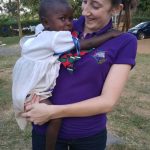 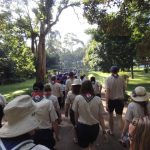